Alpha Bank and Eurobank signed an agreement with the European Investment Bank (EIB) to participate jointly in the Infrastructure Fund of Funds – InfraFoF that has been established by the Hellenic Ministry of Development and Investments and EIB.

Through the Infrastructure Fund of Funds – InfraFoF and the utilization of national and European Commission resources, total investments in Greece of at least €650 million are gradually going to be unlocked for sustainable projects across priority sectors namely, renewable energy, energy efficiency and urban development.

The CEO of Alpha Bank, Mr. Vassilios Psaltis stated: “Alpha Bank, through its participation in the new Infrastructure Fund of Funds, expands its long-lasting cooperation with the European Investment Bank and continues to actively support the environmentally and socially responsible entrepreneurship, while employing its extensive know how in large - scale project financing, infrastructure investments and energy. Consistent with its commitment to promote sustainable development, Alpha Bank will support environmentally - friendly investments, which use low-carbon emissions technology and thus contribute in the creation of infrastructures with reduced environmental footprint. Through active investing in the sectors of renewable energy, energy efficiency and urban infrastructure, we continue to support the recovery of the Greek economy”.

Eurobank’s Chief Executive Officer, Mr. Fokion Karavias, said: “The agreement on Eurobank's participation in the new Infrastructure Fund, focusing on renewable energy, improving the energy efficiency of public and private buildings and urban development,  enhances the Bank's long-term, successful partnership with the European Investment Bank while it highlights our commitment to sustainable development and adoption of practices and initiatives based on the principles of socially and environmentally responsible entrepreneurship. We believe that this new investment programme will support a large number of projects in the coming period, with significant impact on local communities. It will contribute, substantially, to the collective effort for accelerating growth in Greece, in the medium term and increase new job creation. An effort that Eurobank supports systematically and actively”.

Andrew McDowell, European Investment Bank Vice President, said “Thousands of companies across Greece have been able to create jobs and expand business activity following investment supported by the European Investment Bank and leading locally active banks. Our close partnership has a proven track record of backing private sector investment, including dedicated financing to support youth employment and female empowerment. I am pleased to confirm that last week agreement was reached to enable future cooperation with Alpha Bank, Eurobank, National Bank of Greece and Piraeus Bank and the Hellenic government to support priority infrastructure investment under a new EUR 650 million initiative. The Infrastructure Fund of Funds scheme provides a model for other countries in Europe to follow and the EIB looks forward to working with Greek banking partners in the years ahead to further strengthen support for transformational investment across Greece.”

Alpha Bank and Eurobank will initially use €32 million from the new Fund to support investment in eligible projects across Greece which will be also financed from their own resources.

The new Fund, acting as a basis for similar schemes in Europe, is expected to mobilize investments in clean energy projects such as wind farms, photovoltaic installations, biogas and biomass plants, hydroelectric power stations. New investment to improve energy efficiency in public and private buildings, investment in industrial parks, education and cultural facilities, tourism facilities and conference centers will be considered. In addition, it is expected to finance completion of infrastructure projects that have been delayed in recent years, while a number of local projects to be financed by the scheme are expected to enable use of previously abandoned facilities by new commercial activity.

The Hellenic Ministry of Development & Investments established the Infrastructure Fund of Funds with the European Investment Bank to maximize the impact of European Structural and Investment Funds, along with national funds sourced from an EIB loan and proceeds returned from previous urban investments under the JESSICA initiative.

Once fully operational, the new infrastructure scheme will provide financing of €450 million unlocking total investments of at least €650 million for sustainable projects across priority sectors. The European Structural and Investment Funds contribution comes from the Operational Programme Competitiveness, Entrepreneurship and Innovation 2014-2020. 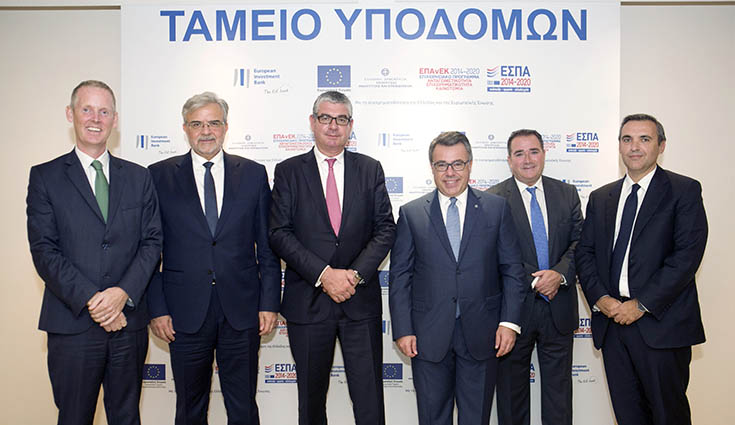