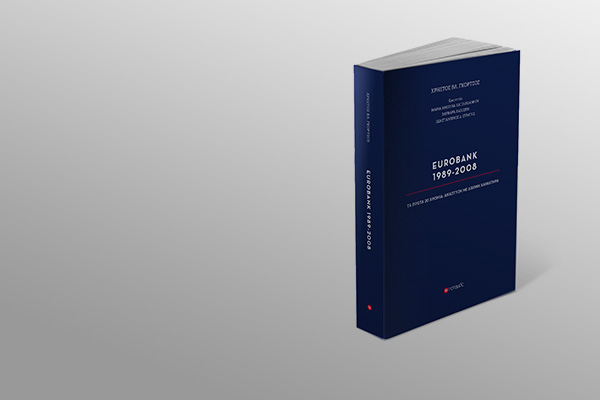 A chronicle of the history of Eurobank from 1989 to 2008.
The book Eurobank 1989-2008. The First 20 Years: Growth with an International Flair is a study that records and analyses initiatives and events surrounding the establishment, growth and consolidation of Eurobank within the Greek banking system.

The author is Christos Gortsos, lawyer and Professor of Public Economic Law at the School of Law, National and Kapodistrian University of Athens.

Mr Gortsos has participated in international research projects on the European banking supervisory and regulatory framework, and served as Secretary General of the Hellenic Bank Association for a number of years.

The chronicle covers the events surrounding the establishment, growth and consolidation of Eurobank within the Greek and wider regional banking and financial system over a relatively short period of time, from 1989 to 2008.

It also encapsulates the institutional, economic and business environment of the time and the emerging dynamics of the competition within the sector, as well as the mentality that formed the foundation for major business initiatives and decisions.

The study is based on archived material kept by Eurobank, articles in the Press, related bibliography, as well as international, EU and Greek legislative and regulatory texts.