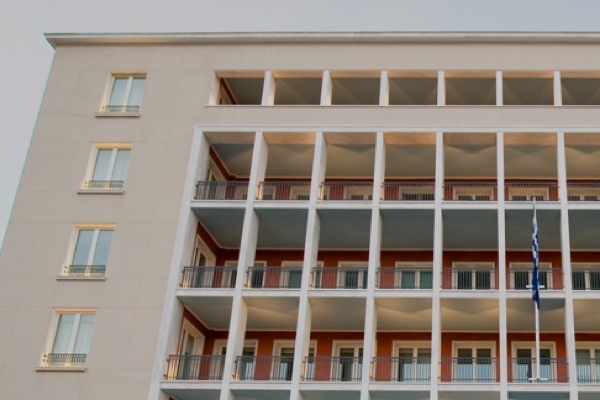 The strategic partnership between Eurobank and Banco Santander and Eurobank’s participation in the 1stGlobal Digital Business Interconnection Network, the “Trade Club Alliance” which is being supported by sevenbanking groups in 22 countries, was presented today at Megaron, The Athens Concert Hall.The event started with opening remarks by Eurobank’s Chief Executive Officer Mr. Fokion Karavias, while theDeputy Minister of Foreign Affairs, Mr. George Katrougkalos made a welcome address on behalf of the Greekgovernment.

Banco Santander was represented by high rank executives of the Group and in specific by Mr. FernandoLardies, head of Network Banking, Mr. John Carrol, head of Product Management and International Businessof Santander UK, and Mr. Jon Barañano Gaviña, Global head of non-Financial Services, who was, recently,elected Chairman of the “TradeClub Alliance”.

Eurobank joined “Trade Club Alliance” after negotiations – for many months – between Eurobank’s GlobalTransaction Banking Sector with Banco Santander. For completing and sealing the strategic agreement, theSpanish Group confirmed Eurobank’s capability and adequacy to meet the requirements for participating in the Club of strong banking groups of the Alliance, given the economic crisis in Greece and the possible constraints under the existence of capital controls in the country.

Key role in approaching and achieving the partnership between Eurobank and Banco Santander heldExportgate, the electronic gate to global trade and business networking, created by Eurobank and developedin cooperation with the three main export associations of the country (PEA, SEVE, SEC) and SEV (HellenicFederation of Enterprises), in an effort to assist Greek economy and Greek businesses to cope with and exitthe economic crisis. Exportgate was created in the context of initiatives taken by the Chairman of Eurobank’s Board of Directors Mr. Nikolaos Karamouzis, already from 2009 with the aim to strengthen the extroversionof Greek economy.

«Exportgate makes the next big step. It participates as a founding member in Trade Club Alliance, the first
global digital business interconnection network. The network is at an expansion phase and is expected toextend to more than 30 countries, in 2017. It is especially important for Eurobank to have, internationallyacclaimed partners like Santander, and other banks that participate, like the Belgian KBC, the ScandinavianNordea to name a few. The fact that such a number of banks, of such magnitude and range, trust andcooperate with a Greek bank, Eurobank, in a trade transaction network, is a measure of credibility for our Bankand a vote of confidence to the prospects of our country and our economy”.

“Economy has returned togrowth rates and the sacrifices of Greek people bear fruit. Tourism inflows, the growth in exports and theindicators of new orders for Greek companies combined with the unemployment reduction show that Greekeconomy enters a new phase of growth. As the Ministry of Foreign Affairs we are committed to support everyeffort that strengthens extroversion and widens prospects for Greek companies. Therefore we have takenunder our auspices and we support, among other initiatives, Eurobank’s program “Go International” throughand the network of Greek embassies and of Offices of Commercial and Economic Affairs, abroad”.

On behalf of Banco Santander Mr. Fernando Lardies, Head of Network Banking at Banco Santander, stated "We are honoured to have Eurobank in Trade Alliance. They have excelled in international business for manyyears as shown by the brand recognition and prestige of Exportgate. I am sure Eurobank will have a verypositive contribution to the Trade Club Alliance"

Mr. Konstantinos Vasilliou, General Manager, Head of Group Corporate & Investment Banking at Eurobank
referred to the importance that the deal has for Eurobank’s customers, stating among other things: “Ourmain focus is on supporting our clients and creating business opportunities so that they cope with thechallenges of domestic and international competition. Our partnership with Banco Santander and other large international banks, serves this purpose. We are the Bank that supports entrepreneurship and we prove thisthrough our actions, initiatives, partnerships, products and services of high quality”.

During the event, more than 400 Eurobank’s customers, many of them already members of the “Trade Club” were enlightened about the strategic agreement and the benefits that arise from this initiative by, urobank’srepresentative in the “Trade Club Alliance”, Mr. Michalis Tsarbopoulos, Assistant General Manager, Head of Global Transaction Banking at Eurobank and by the Chairman of “Trade Club Alliance”, Mr. Jon BarañanoGaviña, Global Head of Non – Financial Services at Banco Santander.

“Trade Club Alliance” is the First Global Business Interconnection Network and at this stage it is beingsupported by seven international banking groups in 22 countries. Banco Santander, Eurobank, Nordea, Attijariwafa, KBC that participate already in the Network. During 2017 the Network is expected to expand tomore than 30 countries, covering a wide range of markets like USA, China, Germany, United Kingdom, Spain,Poland, Netherlands, Belgium, Sweden, Norway, Denmark etc.

Through Eurobank Trade Club Greek and Cypriot companies gain access to 11.000 companies / customers ofinternational banks. In the next 3 years this number is projected to reach 100.000 and to cover almost all themost important international markets. A new special credit facility of up to €1.000.000 will be offered toEurobank Trade Club members by the Bank, in order to finance their International Trade transactions. Thefacility will be utilized for the issuance of Letters of Credit/SBLCs/ Letters of Guarantee, for supply chainfinancing such as imports invoice payments, while for the exporting companies it will be applicable to preshipment and post shipment financing.

The track record of Exportgate, since 2013, has been a decisive factor for the participation of Eurobank in the “Trade Club Alliance”. Exportgate, is the most complete, Greek, electronic portal that promotes the business networking of Greek and Cypriot companies on a global level, and it has been developed by Eurobank in cooperation with the main business and export associations of the country.

In its 4 years of operation it has proven to be one of the most recognizable export portals at a global level, with more than 1.2 million visitors from 110 countries.Since January, 2016 the members of Exportgate can explore new business opportunities having access to morethan 1 million calls of interest that are being published annually from a large number of countries. Furthermore, they have the ability to go through databases with information about 200.000 import companiesfrom 32 countries. Exportgate was technologically upgraded and fully renewed in the first quarter of 2017. During 2017, morethan 300 new companies became members of Exportgate, and more than 180 selected Greek companies havealso joined the “Trade Club”.