Eurobank and Ryerson University signed a five-year Memorandum of Understanding (MOU) creating a new way to enhance youth entrepreneurship. The Eurobank - Ryerson University alliance aims to provide the Greek start – up ecosystem with new opportunities for business networking, as well as access for young Greek entrepreneurs to upgraded educational programs.

Dr. Marie Bountrogianni, Dean of "The G. Raymond Chang School of Continuing Education” at Ryerson University, based in Canada, visited Athens for the activation of this agreement.

Under the MOU, synergies are going to be developed between Eurobank and DMZ (Digital Media Zone), the business accelerator for start-ups operating as a unit within Ryerson University. DMZ, operating for eight years, has reached the top world ranking, in its category*. DMZ's innovative action is in line with the philosophy of Ryerson University, one of the most quickly developing universities in North America, specializing in innovative educational programs. Since its inception in 2010, DMZ has already supported more than 336 start-up companies that have raised $474.5 million in seed funding and fostered the creation of more than 3,000 jobs.

Eurobank Deputy Chief Executive Officer, Mr. Stavros Ioannou, said: "Eurobank invests in healthy Greek entrepreneurship at all stages of its development with vision, making credible choices and responding to international trends. Supporting youth entrepreneurship, even during the Greek crisis, has been a strategic choice for Eurobank. In this context, we created The Innovative Youth Entrepreneurship Program egg - enter•grow•go, which has evolved to become a reference point for the Greek start - up ecosystem. Agreements such as our strategic engagement with the internationally acclaimed Ryerson University will multiply the opportunities for extroversion and growth that will be available for promising young Greek entrepreneurs".

“Ryerson University is delighted to partner with Eurobank and egg to support youth entrepreneurship. Our multidisciplinary zones, incubators and start – ups are a key component of Ryerson’s institutional identity and a strong demonstration of our commitment to innovation. We believe that by supporting Canada’s next generation of entrepreneurial talent, we are doing our part to support the economic growth of our country. By sharing DMZ’s expertise with entrepreneurs at egg, Ryerson is also doing its part to support future development in the great country of Greece,” said Dr. Bountrogianni.

The five-year Eurobank - Ryerson University agreement, which may be renewed for another five years, develops into two pillars:

The first pillar will be developed within the framework of egg. Groups of egg will be given the possibility to participate in DMZ training and mentoring programs.

During her visit in Athens, Dr. Bountrogianni had the opportunity to meet with groups from egg, the Youth Entrepreneurship Program, designed and implemented by Eurobank in cooperation with Corallia, EK Athena since 2013. She also welcomed the launch of the 3rd FinTech regional competition “Beyond Hackathon", organized by Eurobank, and participated as a member of the Judging Committee.

* According to UBI Global rankings, among incubators that are being operated by universities 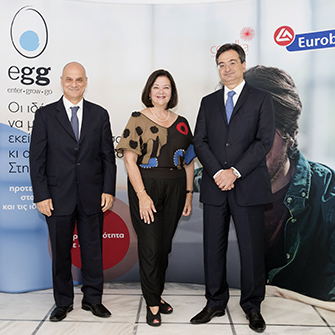