Eurobank sponsored the Award Ceremony for the Pan-European Empress

Theophano Prize & the Theophano Round Table

Eurobank supports the "Empress Theophano" European Prize, awarded this year to Dr. Uğur Şahin and Dr. Özlem Türeci, the couple of scientists who developed the first vaccine against coronavirus. The award ceremony took place in the emblematic Rotunda Monument at Thessaloniki, on Wednesday October 13, 2021, in the presence of Her Excellency the President of the Hellenic Republic Katerina Sakellaropoulou and distinguished guests from all across Europe. Eurobank also supports the new initiative, the Theophano Round Table, established this year by the Governing and Advisory Committee of the Theophano Foundation. The first ever Theophano Round Table was held on Thursday October 14, 2021 under the theme “Securing Future Wellbeing Through Science” at Thessaloniki.

Her Excellency the President of the Hellenic Republic Katerina Sakellaropoulou addressed the event, while Mr. Stavros Andreadis and Mr. Herman Count Van Rompuy, who chair the Governing Committee and the Advisory Committee of Theophano Foundation respectively, also addressed the Ceremony that gathered this year almost every member of the Advisory and Governing Council of the Foundation, from across Europe to Thessaloniki. Among them, are Mary McAleese, former President of Ireland, Tarja Halonen, former President of Finland, Rita Süssmuth, former President of the Bundestag of Germany, and Sir Ivan Rogers, former UK Ambassador to the EU. Mr. Stavros Kalafatis, Deputy Minister of Interior, responsible for matters regarding Makedonia – Thrace, and Thessaloniki’s Mayor, Mr. Konstantinos Zervas also attended the Ceremony, presented by Mr. Alexis Papahelas, journalist and the Executive Editor of Kathimerini newspaper.
Eurobank sponsored this year’s grand award ceremony for the 2021 Empress Theophano Prize, as it had also done last year.

Eurobank’s CEO, Mr. Fokion Karavias, stated: “This year’s Empress Theophano Prize honors two scientists whose perseverant research gave us the first vaccine against coronavirus that saved thousands of lives and strengthened hope for a quicker control of the pandemic. Their achievement identifies fully with the values advocated by this Prize, established to reward and honor individuals and institutions with a contribution to common welfare and life improvement. Eurobank identifies itself with these values, consistently seeking to be useful for the societies in all countries where it is present, through its daily business practice and its wide set of Corporate Social Responsibility Initiatives.”.

The two nominated scientists were keynote speakers in the Theophano Round Table held, for the first time ever, on Thursday October 14, 2021, under Eurobank’s sponsorship, in Emilios Riadis Hall at Thessaloniki Concert Hall. Mr. Margaritis Schinas, Vice President of the European Commission for Promoting the European Way of Life made a welcome speech. Leading personalities, members of the Foundation’s Advisory Committee, from across Europe participated in the dialogue. Among them are Mary McAleese, former President of Ireland and Professor of Children, Religion and Law at the University of Glasgow, Maria Luisa Poncela, Former Secretary of State for Trade and Secretary General for Science and Innovation of Spain, Georges Prevelakis, Professor Emeritus, Paris-Sorbonne University and Chiara Saraceno, Honorary Fellow, Collegio Alberto, University of Turin. Professor Stefan Schepers, a member of the Governing Council of Theophano Foundation coordinated the panel. This new initiative seeks to develop in to a discussion panel on critical issues of concern for humankind in the decades to come.

Since its establishment, the Empress Theophano Foundation has set the goal of rewarding individuals and organizations for their impact on the understanding and strengthening of the contemporary European idea and their contribution to social good, welfare and improvement of lives. The first ever Empress Theophano Prize was awarded in 2020 to the ERASMUS Exchange Programme._ 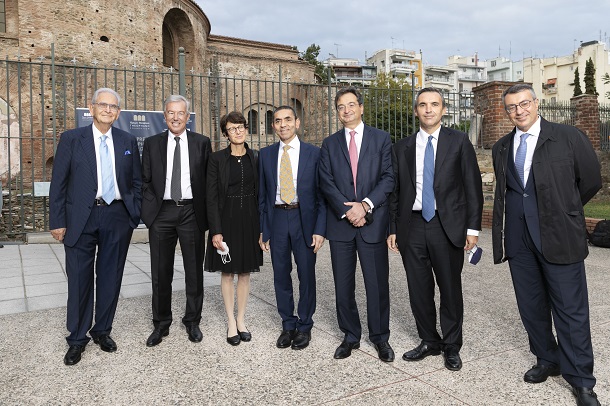