egg - enter-grow-go, the most prominent business accelerator in Greece designed and implemented by Eurobank and Corallia of the RC Athena since 2013, announces new agreements with strong international footprint and undertakes important development initiatives seeking to further strengthen and expand the innovation ecosystem. egg has a successful ten-year track record in the Greek market, already, were presented today at EGG Hub, egg's new premises at Moschato, at an event inaugurated by the Minister of Digital Governance, Mr. Kyriakos Pierrakakis.

Mr. Fokion Karavias, Eurobank's Chief Executive Officer, underlined the Bank’s firm commitment to supporting innovation that promotes business extroversion. "egg’s successful ten-year course signals the strong dynamics of Greek innovative entrepreneurship" he said during his opening remarks at the event, in the presence of Eurobank’s Chairman of the Board of Directors, Mr. George Zanias and the Bank’s Deputy CEOs, Mr. Andreas Athanassopoulos, Mr. Konstantinos Vassiliou and Mr. Stavros Ioannou. Before the event a workshop with three sessions took place, with the participation of, the Deputy Ministers of Research & Technology, Mr. Christos Dimas and of Tourism, Ms. Sofia Zacharaki as well as representatives of Toronto Metropolitan University, Cyprus Seeds, and the Israeli start-up entrepreneurship ecosystem. Representatives of institutional bodies, including The Hellenic Federation of Enterprises – SEV, the Greek Tourism Confederation - SETE, Enterprise Greece and Elevate Greece, with whom egg has strategic partnerships and distinguished academics from Greece and abroad, as well as members of the Advisory Board and the egg Steering Committee attended the inauguration ceremony of egg’s new premises.

The Minister of Digital Governance, Mr. Kyriakos Pierrakakis, stated: "egg has proved to be a point of reference for start-ups, acting as a solid ground for them to take their first steps. Today, at the inauguration of the EGG Hub, we witness the egg organization grow and make tremendous progress, just like the many startups that have also done so in the past thanks to its assistance. I sincerely hope that the new premises will host a dynamic and extrovert innovation ecosystem, which through international synergies will bring out the next generation of Greek startups.".

In the context of its new initiatives, egg:

Eurobank will participate as a private investor in five (5) Venture Capital funds, supported by the Hellenic Development Bank and will invest additional €5 million, doubling its participation in such VCs. It will also participate, initially with €19 million in the new Enterprise Fund (Loan Fund and Guarantee Fund), managed by HBD in cooperation with the Greek Ministry of Development and Investment.

The three thematic panels, "Internationalization & Extroversion", "Innovation Cooperative Formations Tourism/Culture and "Interface between Research, Innovation & Entrepreneurship", as well as the opening ceremony of the Egg Hub, were attended by more than 1.000 guests._ 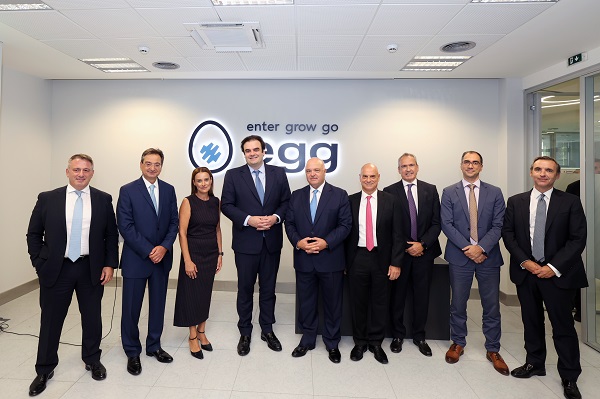