Greece and Cyprus are represented in the Trade Club Alliance by Eurobank Group.
During November 8- 9, 2018, Eurobank is hosting the 3rd General Assembly meeting of the TCA. This is the supreme decision – making and coordinating body of the Trade Club Alliance. The fact that Athens was chosen for the TCA members’ summit is indicative of the importance given to Greece’s key geographic location and its role as an intermediary hub for international trade. This is the first time that the Trade Club Alliance General Assembly takes place in a city other than Madrid, where the Spanish banking group Banco Santander is headquartered. Banco Santander leads, supports and coordinates the establishment of this international banking alliance. The decision to conduct the 3d General Assembly of the TCA in Athens is also proof of the confidence shown by Banco Santander and TCA members in Eurobank and in the prospects of the Greek economy.

The development of the TCA and the new ways of providing support to Greek companies, for their international networking and their import/export activity in an environment full of challenges and opportunities in international trade, were presented at a press conference held with the participation of representatives of the Trade Club Alliance, in Athens.

The representatives of the foreign banking groups, members of the TCA, enjoyed a warm welcome by Eurobank's Chief Executive Officer, Mr. Fokion Karavias, at the Bank’s headquarters in Athens, while the start of the summit was announced by Eurobank’s Deputy Chief Executive Officer, Mr. Konstantinos Vassiliou. In his introductory speech, Mr. K. Vassiliou stated, among other things: "Eurobank, the most internationalized Greek bank, has consistently been building strong alliances with leading foreign financial groups in recent years. It is in a position to offer innovative options, modern tools and services with multiplier benefits to Greek businesses. Our active participation in the dynamic and innovative alliance of Trade Club Alliance enhances the role of our Bank and consistently serves our strategy to strengthen the extroversion of the Greek economy in order to establish viable and sustainable growth."

The recent developments, the prospects for international trade and the role of the banking sector were presented by Deputy General Manager & Representative of the Eurobank Group at TCA, Mr. Michalis Tsarbopoulos and Mr. Jon Barañano Gaviña, President of TCA & Global Head of Non -Financial Services of Banco Santander.
Mr J. Barañano Gaviña stated: “We are very happy to have Eurobank in the Trade Club Alliance. They have always excelled in their focus on international business, which is also core to our strategy. I trust both of us and the Trade Club Alliance will help Greek companies grow their business internationally.”

This year, the eighth (8th) round of Go International – a successful initiative developed by Eurobank for the support of business extroversion - which will be held in Thessaloniki on November 12 – 14, 2018, is supported by Banco Santander, as well as, all other Trade Club Alliance members with the participation of representatives of the foreign banks and large foreign clients - members of the TCA. This is characteristic of how Greek companies stand to benefit from the participation of Eurobank in the Trade Club Alliance. Banks and businesses will have the opportunity to exploit new trade agreements through approximately 3,000 targeted business meetings (B2B) that are going to be held during the Go In Thessaloniki event. The event is being organized with the cooperation of the Greek Exporters Association-SEVE, the Panhellenic Exporters Association (PEA), the Exporters’ Association of Crete (SEK), the SEV – Hellenic Federation of Enterprises and the Greek Tourism Confederation (SETE).

Trade Club Alliance is the first Global Digital Network of International Business Interconnection, currently supported by 14 international banking groups - 13 active members and one in the final phase of integration - in 50 countries.
The network, which includes, among others, Banco Santander, Eurobank, Nordea, KBC, Banco BPM, IBK (Industrial Bank of Korea), Attijariwafa, SCB (SIAM Commercial Bank), Abu Dhabi Commercial Bank, Credit Agricole, is growing fast. Already 12,000 banking client/companies have joined the Club as members, while by the end of 2020, 100,000 companies worldwide are expected to participate in it.

Photo 2 : Eurobank senior officials with the members of the Trade Club Alliance. 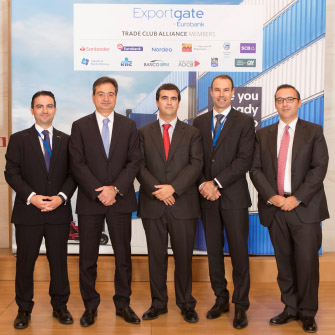 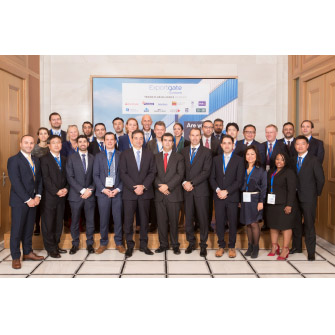