The six (6) winners of the “Growth Awards” were announced at a special ceremony co – organized by Eurobank and Grant Thornton on Tuesday, February 6th, 2018 at Megaron – The Athens Concert Hall.

The “Growth Awards” initiative continues for a 2nd year. It aims to recognize business excellence and support Greek companies that stood apart from the competition and excelled despite the crisis, combining strong financial performance, dynamism and extroversion, managing to contribute meaningfully to the creation of a new business environment characterized also by strong social responsibility.

Mr. Fokion Karavias, Eurobank’s Chief Executive Officer (CEO) made the opening statement at the award ceremony in the presence of, Mr. Kyriakos Mitsotakis, the President of New Democracy and distinguished personalities from the political, economic, academic and business communities of Greece
Mr. George Katrougkalos, deputy Minister of Foreign Affairs sent a short greeting speech on behalf of the Greek government.

Mr. Peter Bodin, Grant Thornton’s Global CEO, in his speech “A new mindset for a new corporate world” talked about how can business adopt a mindset that embraces change and creates a culture that can turn disruption into an advantage, as the pace of change accelerates.

Mr. Nikolaos Karamouzis, Eurobank’s Chairman of the Board of Directors and Mr. Vassilis Kazas, Managing Partner of Grant Thornton Greece, who co-chaired the Award Committee that evaluated the candidacies and selected the winners, talked about the idea and the importance of the Growth Awards initiative. The initiative aims at, recognizing business excellence and promoting Greek innovative businesses, highlighting those companies that can perform a leading role in the productive restructuring of the Greek economy. The process of selection and the 21 companies that entered the last stage of evaluation by the Award Committee – consisting of 17 distinguished personalities from the Greek business and academic arena - was also described.

At his opening remarks, Eurobank’s Chief Executive Officer, Mr. Fokion Karavias, mentioned the need to exploit the advantages that the country has in strategic sectors in which “wider geopolitical formations, technological developments, tradition, and Greece’s natural resources give us the chance to act a leading role, for many decades. In particular, major projects in the energy sector, in logistics and tourism, with the related infrastructure projects, can attract international interest for investment over €20 billion. Cumulatively they will cause GDP creation of around €30 billion over a decade and at least of €60 billion over a twenty – year horizon. The final effect might prove even larger!” said Mr. Karavias explaining that “the above estimates are central in our business planning and in Eurobank’s priority setting. Eurobank wants and can have a central role in the financing of business plans that are part of what I described as development projects”.

Regarding the “Growth Awards”, Mr. F. Karavias underlined that Eurobank’s cooperation with Grant Thornton confirms the need for partnership instead of individual initiatives, the need for long – term commitments instead of conjunctive actions, the need for having clear targets and giving motives, awarding those that succeeded as the companies awarded tonight have done.

In his greeting speech, Mr. G. Katrougkalos mentioned that “the basic principles of the new development model are summarized in the use of knowledge and the available human capital, the promotion of innovative entrepreneurship, the creation of quality infrastructure and administrative efficiency. Our key objective is to move towards an economy that produces products and services with high added value that can compete in international markets”.

The President of New Democracy, Mr. K. Mitsotakis, focused on the structural changes that the country needs in order to liberate its productive forces from the ties of statism. Among other things he referred to his plan for state reform, tax and levy reduction, as well as a comprehensive set of policies that will enhance the competitiveness and extroversion of Greek companies.

Mr. Manolis Michalios and Mr. Nikos Ioannou, Partners of Grant Thornton, presented the Grant Thornton research of 8.000 entities reflecting the trends being shaped and highlighting strengths and needs evolving in the new conditions, shedding light in the future of Greek entrepreneurship.

The 6 (six) companies that were awarded per category are: 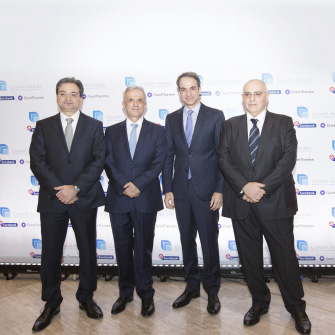