Vote of confidence in DESFA by National Bank of Greece, Eurobank, Alpha Bank, and Piraeus Bank

The National Bank of Greece, Eurobank, Alpha Bank, and Piraeus Bank reiterated their support for the development plan of the National Natural Gas System (NNGS) and the role of the DESFA in establishing Greece as an energy hub in the wider region, by signing a Syndicated Bond Loan Facility of €505 million with DESFA. The 4 Greek banks will share the role of Mandated Lead Arranger, while National Bank of Greece shall in addition act as Co-ordinator and Eurobank as Agent.

The tenor of the loan agreement is twelve (12) years, and its purpose is to finance the ten-year Development Plan of the NNGS 2021-2030, which includes more than 48 project totaling 540 million euros, as approved by the Regulatory Authority for Energy (RAE). These are significant investments in infrastructure that will upgrade and expand the NΝGS, while ensuring the diversification of supply sources and security of supply of the country and the wider region.

The General Secretary of Energy and Mineral Resources, Alexandra Sdoukou, stated in this regard: ‘’The Ministry for the Environment and Energy salutes the signing of the bond loan agreement between DESFA and the 4 systemic commercial banks in Greece, as an integral step in the expansion of our National Natural Gas System across the country, especially some of its more remote areas, and a milestone in our decarbonisation efforts and our energy transition path towards Net Zero.’’

The CEO of DESFA, Maria Rita Galli, noted: "The signing of the agreement for the €505 million Common Bond Loan is a strong vote of confidence of the Greek banking system in DESFA and its long-term investment plan. This financing will provide the necessary liquidity for the seamless implementation of the ten-year Development Plan of the NNGS, while at the same time offering additional impetus to DESFA, to substantially contribute to the next day of the energy transition and the establishment of the country as an energy hub in the wider region”.

The CEO of the National Bank of Greece, Pavlos Mylonas, stated: “NBG continues to play a leading role in large strategic transactions that reinforce and accelerate the development of the country's infrastructure, capitalizing on its key competitive advantages, namely deep understanding of the energy sector and highly experienced professionals. This financing confirms the strategic focus and the continuous support of NBG in the particularly important energy sector and strengthens its long-term cooperation with DESFA, while, at the same time, highlights its leading role in organizing complex transactions”.

The CEO of Eurobank, Fokion Karavias, stated: “Investing in large infrastructure projects is key for Greece’s recovery and long term growth. The energy sector is pivotal in this strategy. Eurobank, as a growth-focused bank with embedded ESG criteria in our business practices, is proud to be able to contribute in the implementation of DESFA’s strategic plan for growth and of the National Natural Gas System”.

The CEO of Alpha Bank, Vassilios Psaltis stated: “Our participation in the syndicated facility for the financing of DESFA growth investment plan constitutes tangible evidence of our commitment to the improvement of the natural gas transfer infrastructure, as a prerequisite for the energy security of our country and its transition to more eco-friendly sources of energy. Alpha Bank is taking the lead in the financing of infrastructure and high value-added projects, aiming at creating the conditions for Greece’s long-term and sustainable growth”.

The CEO of Piraeus Bank, Christos Megalou, stated: “At Piraeus Bank we consistently support investments that aim at upgrading the country’s infrastructure, thus contributing to energy transition and sustainable economic development. We will continue to strengthen every sector of economic activity, emphasizing on those that are directed towards showcasing the country as an energy hub in the wider region, and the transformation of the Greek economy into a modern and strong economy with emphasis to extroversion”. 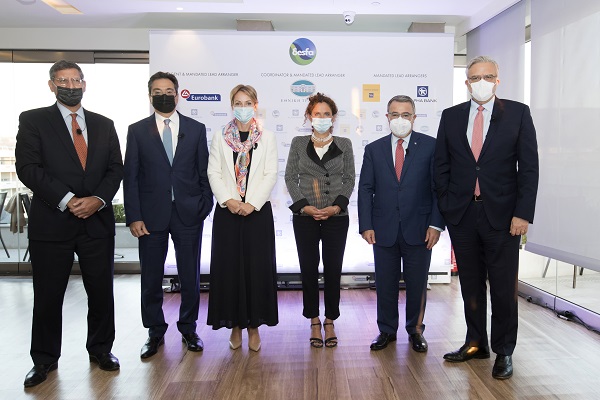